Located on the continent of South America, Brazil is the fifth largest country in the world, surpassed only by Russia, Canada, China and the United States of America. It is also the largest country in South America, by both population and area, spanning approximately 2,700 miles (4,350 km) from north to south and east to west with 4,600 miles (7,400 km) of coastline along the Atlantic Ocean. The country’s official title is the Federative Republic of Brazil, Portuguese República Federativa do Brasil. With the exception of Ecuador and Chile, Brazil shares inland borders with all of the South American countries, which include Uruguay, Argentina, Paraguay, Bolivia, Peru, Colombia, Venezuela, Guyana, Suriname, and French Guiana.

The vast area of the country enables a variation of landscapes, including tropical and subtropical climates, low mountains, wetlands, savannahs and plateaus, as well as containing the majority of the Amazon River basin, which encompasses the world’s most extensive primary rainforest and the world’s largest river system. 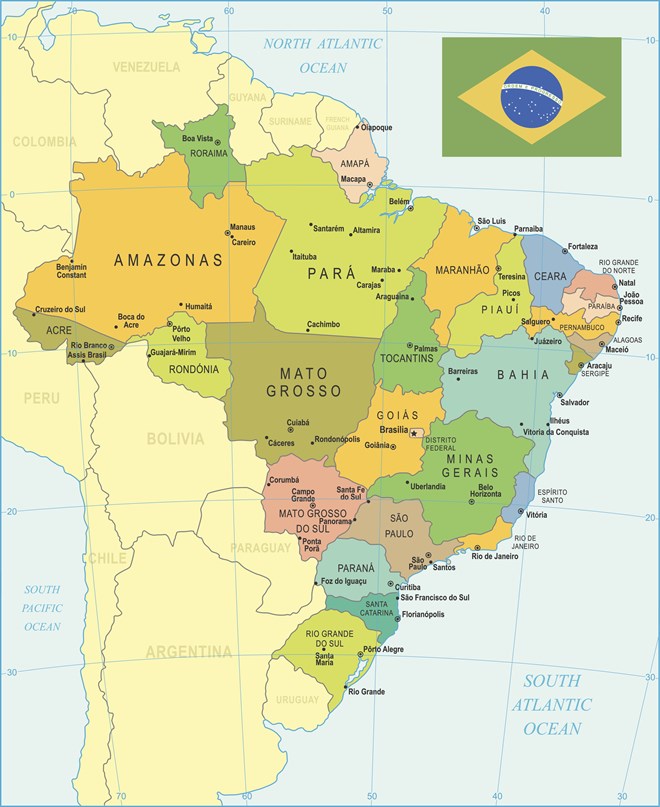 There are a number of political challenges in Brazil. It is however, attempting to deal with fundamental corruption within the country, and hosted the 2016 Olympics and Paralympics with great success.

Brazil consists of 26 States and one Federal District. The Federal Senate and Chamber of Deputies make up National Congress. Elections are held by popular vote every four years. Voting is voluntary if you are aged 16-18 or over 70, but compulsory for those aged between 18 and 70.

On the 31st August 2016, the president at the time, Dilma Rouseff was impeached and was replaced by President Michel Temer of the Brazilian Democratic Movement Party, whose term officially ended in December 2018. Temer’s Government formally applied for membership of the Organisation for Economic Co-operation and Development (OECD), and he aimed to restructure the Brazilian economy. However, in the ‘Operation Car Wash’ anti-corruption probe which has absorbed Brazil over the past couple of years, President Temer was named and put under investigation for allegedly admitting to misconduct in a voice recording whilst he was in office.

The most recent elections were held in October 2018. Jair Bolsonaro, a far-right former paratrooper and army captain, was elected as the new Brazilian president with a 55.2% victory over leader of the left-wing Workers' Party, Fernando Haddad. Much of the success of his Presidential campaign was due to his promise to reduce crime and corruption within the country, which have been prevalent. Bolsonaro was officially sworn in as President on the 1st January 2019.

The UK has a considerable official presence in Brazil with an Embassy, four Consulates, and a British trade office.

The 1988 Brazilian Constitution legally protects human rights. However, in terms of upholding the law and dealing with human rights issues, some areas are lacking and require improvement despite efforts to strengthen legislation and expand democracy. Brazil is a democratic state but there are deep-set social and economic inequalities. Between 1964 and 1985, Brazil was overseen by a military dictatorship, traces of which still remain in aspects such as the police forces, which are militarised to an extent.

Although there is no national plan for business and human rights, Brazil does have a national contact point for the Organisation for Economic Co-operation and Development (OECD) guidelines for multinational enterprises. This contact point enables the development of the impact and efficiency of the OECD guidelines through their promotion throughout Brazil and their contribution to resolving issues and enquiries. Awareness and commitment to acknowledging international standards for human rights from both public and private companies are increasing in Brazil.

Brazil scored 78 (0=worst; 100=best) in the 2018 Freedom House assessment of political rights and civil liberties. See the full Freedom House report here: https://freedomhouse.org/report/freedom-world/2018/brazil. The 2018 World Press Freedom Index ranked Brazil 102nd out of 180 countries with a score of 31.20, which is shows an improvement of one position since the 2017 report. See: https://rsf.org/en/brazil.

Due to higher levels of immigration over the past few years, there have been increased concerns regarding working conditions related to slavery. In terms of modern slavery, Brazil has a relatively low prevalence ranking at 142nd out of 167 countries in the 2018 Global Slavery Index, with an estimated proportion living in modern slavery at 1.79 per 1,000 people, which therefore transpires that out of a population of approximately 209.2 million there are an estimated 369,000 people living in modern slavery in Brazil. Visit: https://www.globalslaveryindex.org/2018/data/maps/#prevalence for more information.

Brazil’s economy is the 9th largest in the world, valued at US $2.14 trillion, according to International Monetary Fund (IMF) data from 2018, see: https://www.weforum.org/agenda/2018/04/the-worlds-biggest-economies-in-2018/. It is a member of the Mercosur trading bloc, and is the biggest economy in South America, responsible for almost 50% of the continent’s GDP. With a population of over 209 million, Brazil’s registered GDP at PPP (Gross Domestic Product at Purchasing Power Parity) was US $15,483.5 in 2017 according to the World Bank. See: https://data.worldbank.org/indicator/NY.GDP.PCAP.PP.CD?locations=BR&type=shaded&view=map.

Brazil’s current economic growth has led experts at PwC to estimate that it will grow to be the world’s 5th largest economy by 2050, overtaking the UK who are currently 5th, according to a report from the World Economic Forum (https://www.weforum.org/agenda/2017/12/these-will-be-the-most-powerful-economies-in-the-world-by-2050).

A number of business reforms took place in Brazil from 2017-2018, with the aim of attracting investment, creating more jobs and making the economy more competitive. Brazil is now ranked 109th out of 190 countries in the World Bank’s 2019 Ease of Doing Business report, up from 123rd in the 2017 report, suggesting that the reforms have already been beneficial. To view the World Bank’s article on business reforms in Brazil, see: http://www.worldbank.org/en/news/press-release/2018/10/31/doing-business-report-brazil-steps-up-reform-agenda-carrying-out-record-business-reforms.

There is an inherent potential to maximise and increase current automotive and aviation exports within South America, as well as to Europe, Africa and Asia.

In terms of growth and economic development, infrastructure has been identified as a priority sector, including road and aviation travel, logistics of cargo, and energy.

Brazil is seen as a gateway to business in other Latin American countries, being the largest economy in the region.

The port of Santos in São Paulo is the largest port on the continent, and is the primary commercial point of access for the majority of European imports.

There is currently no free trade agreement (FTA) between Brazil and the UK.

Brazil is a member of the leading South American political and economic trade bloc, Mercosur, alongside Argentina, Paraguay, Uruguay and Venezuela, although Venezuela was suspended indefinitely in 2016.

The value of the trade of goods and services between Brazil and the UK in 2016 was £5.4 billion, with Brazil accounting for 8.3% of the total UK exports to Latin America.

In preparation for leaving the European Union (EU), the UK views Brazil as a strategic partner in the World Trade Organization (WTO), and will look to Brazil for support when becoming an independent member of the WTO.

On the 28th March 2018, the UK Secretary of State for International Trade, Dr Liam Fox, met with the Brazilian Minister for Industry, Foreign Trade and Services, Marcos Jorge de Lima, for the tenth UK-Brazil JETCO (Joint Economic and Trade Committee) meeting. Discussions regarding trade opportunities, mutually beneficial to both the UK and Brazil were welcomed. To read an in-depth report of the meeting visit: https://www.gov.uk/government/news/joint-statement-from-uk-brazil-joint-economic-and-trade-committee.